I think apple have missed a trick by not having a USB port on the iPad. Can you imagine be able to tether a wifi only iPad to your iPhone or other mobile like the HTC desire I blogged about previously. Nearly £100 saving by buying the Wifi only version. 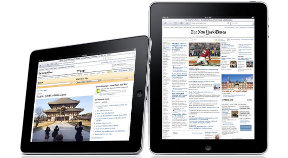 Maybe that’s exactly why they did not put a USB port on, so they can sell the 3G version for more. And what is with the crazy price difference in the U.K? We always seem to be short changed here in the U.K as with Adobe products, Apple seem to be going the same way. I hope after the initial rush Apple might reduce the prices here in the U.K……we will have to wait and see. iPhone OS 4 can’t come soon enough as the lack of multi-tasking on the iPad shows up more than on the iPhone. At least we can say one thing though….the iPad has redeemed Apple from the Newton Message Pad days in the 90’s.